"Acne remains one of the most common and challenging skin conditions to treat. The most popular theory is that acne is a bacterial infection, but recent evidence would suggest otherwise. The following excerpt from the article will discuss all of the pertinent aspects of managing acne, including the latest research, the emotional component, how each of the leading treatments works on the skin, preventing and treating acne scarring, and the influence of diet and environmental factors on acne.


IS ACNE REALLY AN INFECTION?

Let’s start with the current belief that acne is an infection, as this proposed cause has resulted in millions of harmful antibiotics and Accutane prescriptions annually, along with millions more acid and laser peels burning the skin in an effort to kill the bug. For decades, skincare professionals have assumed that a localized infection develops on the skin because of an oil plug, also known as hyperkeratinization, that feeds bacteria (the primary culprit being P.acnes) so plentifully that they create a bigger colony overnight that appears as acne. Wait, what?

The skin is a microbiome with over 1,000 bacterial species that constantly change to adapt to their environment, but the types of bacteria are specific to an individual’s DNA, similar to gut probiotics. Also, most antibiotics, benzoyl peroxide, alpha hydroxy and beta hydroxy acids, retinol, and several other topical agents are an effective bactericidal against P.acnes bacteria and, yet, when used topically, they often have disappointing results at curbing acne, even though they are applied directly onto the infection. In addition, the vast majority of acne cases occur on skin that is not oily at all. While keratin plugs can be seen in acneic skin, they are also present in non-acneic skin, which implies they are part of normal skin physiology. More and more researchers say that they are finding acne to be an inflammatory process, not an infectious one. When they treated people with testosterone to make their skin oily, the acne they developed was along the jawline, not the oily zones. Evidence shows that sebum plugs do not restrict oil flow; microscopic analysis only shows a collection of cellular debris and the plug story was simply an inaccurate assumption.

Here are some questions to ask when looking into acne more deeply. If hyperkeratinization (the cause of plugs) is the core problem, according to most experts, then why does acne not occur randomly on all extremities throughout an individual’s life, as the skin has plugs everywhere? If hormones are to blame, as many experts say, why do they only impact certain regions of the face on most people, when the entire skin and body is being exposed to those hormones? Why does consuming dairy cause so many people to have breakouts if the problem is on the skin’s surface? If retinol is keratolytic and bactericidal to P.acnes, why does it cause purging acne in so many? If acne is more about inflammation than infection, what is the cause of that inflammation and why does it often show up in particular clusters within the face?

It is hard to consider that everything you read and know about acne is wrong, especially when mainstream dermatology and almost everyone else is holding tight to a different point of view, but it is a must.

Great success can be found in treating acne as if it is a toxin purge. For instance, many swimmers develop chest and body acne, which makes no sense if acne is an infection, and these kids are swimming in heavily chlorinated water. However, it does make sense if the professional consider chlorine to be comedogenic when ingested or absorbed internally.

Similarly, why do people on medication lithium have acne? It is also comedogenic. And, looking at polycystic ovary syndrome-related acne reveals why it is different and why it is so prevalent in farming communities. Further, hormonal acne along the jawline occurs at a different time in the menstrual cycle compared to upper face acne. And, there is a connection with ingrown hairs being much more common after eating certain foods or at certain restaurants. Also, individuals who consume dairy are more likely to develop acne in the upper face.

Over time, one can isolate specific toxins to precise regions of the face and body. Even constipation has its own acne pattern. All of this data has been summarized in the skin map.

The skin is a detoxification organ and, yet, not everyone knows how or what it detoxes. The fact that acne occurs in non-oily skin types makes sense because detoxing is not often related to oil production. Also, the idea that acne is caused by hormone fluctuations makes sense because many toxins like chlorine, lithium, pesticides, and food preservatives are estrogenic, meaning they impact the endocrine (hormone) system in a negative way. Acne often appearing in clusters on the skin makes sense if one assumes each cluster is related to a specific toxin.

Not all toxins originate from the environment. Sometimes, the body becomes toxic because of disruptions in the microbiome. One of the most common examples of this is candidiasis or the overgrowth of candida in the gut. While candida is part of the normal flora, it is meant to play a minor role. What changes that dynamic is exposure to antibiotics and progesterone (medication and food-based), sugar, and the development of mucus.

Mucus is stimulated by food irritants, the most common being fried food, pasteurized dairy, and allergies to specific foods. As candida grows, it increases its toxic secretions which are absorbed through the gut and detoxified out of the skin in particular zones. This explains why many people on birth control get acne, why diet is connected to acne, and why most acne treatments are not addressing the problem and, therefore, struggle to clear it.

How can one make sense of the modest success of many antibacterial protocols in the clearance of acne if it is not an infection? Immunosuppression. Many of us have seen cases where a dermatologist had to inject a stubborn acne cyst with steroids to finally get it to shrink. Does that make sense in the infection theory when skincare professionals know that steroids reduce the body’s ability to fight infections? No. It only fits the inflammation model.

In the same way, most of the antibacterial medicines and topicals cause harm to the skin and body. One of the examples is antibiotics which induce a level of inflammation. If a new problem is created for the skin, the burden on the immune system reduces its detoxification activity, thus reducing swelling and redness. The trick here is that the level of suppression will vary between people and topicals, which explains why the success rate of these approaches is often random.

’Hormonal’ acne can be part of the candida picture previously described since progesterone rises in the second half of the cycle and that will stimulate candida. However, the most commonly identified hormonal acne occurs on the jawline. As it turns out, this is caused by estrogenic food preservatives. The reason they purge at the end of the cycle relates to the body trying to balance its own estrogen. This is why people eating fast food and junk food are more prone to jawline acne. Acne on the neck is caused by estrogenic pesticides and plasticides. Acne on the chest and back are caused by two different forms of chlorine. The most common source of chlorine excess is from public drinking water but swimmers are close behind. Many reverse osmosis systems also add chlorine to the process, so keep an eye out for that.

After 10 years of validating the skin map and developing toxin binders and candida killers that work in almost every case, there is no doubt that skincare professionals have found the true causes of acne. This is a powerful tool for both the professional and our clients. Knowing how to map the face and isolate the toxins involved allows clients to identify restaurants, foods, supplements, or lifestyle choices that are leading to their acne problem, so they can do a better job of staying clear outside of the treatment protocols.

Once cleared, the strategy turns to acne scarring. There are a few choices that are commonly used and one novel approach. Dermal needling has some advantages because adhesions are often seen in the dermis that can be broken up by this method. Dermabrasion is an aggressive strategy that is usually only for severe acne scarring because of the required general anesthesia and healing time involved. Onion extract has been used to reduce redness, but it is not a very effective option. For aestheticians, the most effective way to reverse acne scarring is by using ingredients in combination to re-awaken the inherent scar revision process. Certain ingredients have shown the ability to reverse as much as 30% to 50% of the damage in three to six months. It can be even more effective when combined with needling. One of the products we use is Osmosis Catalyst Ac-11

Making improvements to scarring and the clearance of acne can have a dramatic impact on the emotional well-being of a client. Many acne sufferers feel unclean because they often associate acne with dirt, bacteria, or sweat. Many more feel unattractive and often socially isolate themselves because of their skin. Out skincare professionals address these issues head-on. What is nice about the new understanding of the causes of acne is that it no longer puts blame on the skin and empowers the acne sufferer to help in the process by identifying the sources of toxins in their lives. Depression is common and can be significantly worsened with oral acne medication Accutane, so we always keep track of our clients’ medications, as well.

Treating acne requires teamwork and a good intake process. The skin care professional should know the frequency and consistency (sorry) of their clients’ bowel movements because that relates to acne and inflammation around the mouth and midline chin. A client should be asked about what they eat, drink and depending on the location of the acne, where they work. Look for the mucus-causing foods discussed if they have candida acne. The bi-weekly or monthly facials should focus on detoxing the skin until the skincare professional has cleared the source; then, acne scarring protocols can kick in. While extractions are fine and expected, what is learned from the map is that blackheads come from mucus and their location on the face shows where the mucus is located in their digestive tract. The focus needs to be on eliminating the foods that are making it worse because they come from the inside, not dirt.

Protocols for acne should involve an attempt to minimize exposure to the comedogenic toxins, but they can also bind those toxins internally before they reach the skin. In the case of candida, the key is to shrink the candida population, which can be difficult.

Topically, the goal is to increase circulation and to help the skin detoxify. Two great ingredients for this are niacinamide and trioxolane. Niacinamide has to be used on visible lesions as a spot treatment in the beginning because it can cause an acne purge on toxin-filled skin. The reason why mild peels and stimulating facials cause acne is not that they fueled an infection, as that does not make sense. Instead, stimulating treatments increase circulation, which often triggers a toxin dump.

One of the most common questions skincare professionals get is ’Why am I getting acne?’ It is a source of frustration to everyone involved – especially when attempting to make sense of the bacterial model. This no longer has to be the case. Our skin care professionals are certified acne experts by treating the real causes of acne based on skin mapping clues. 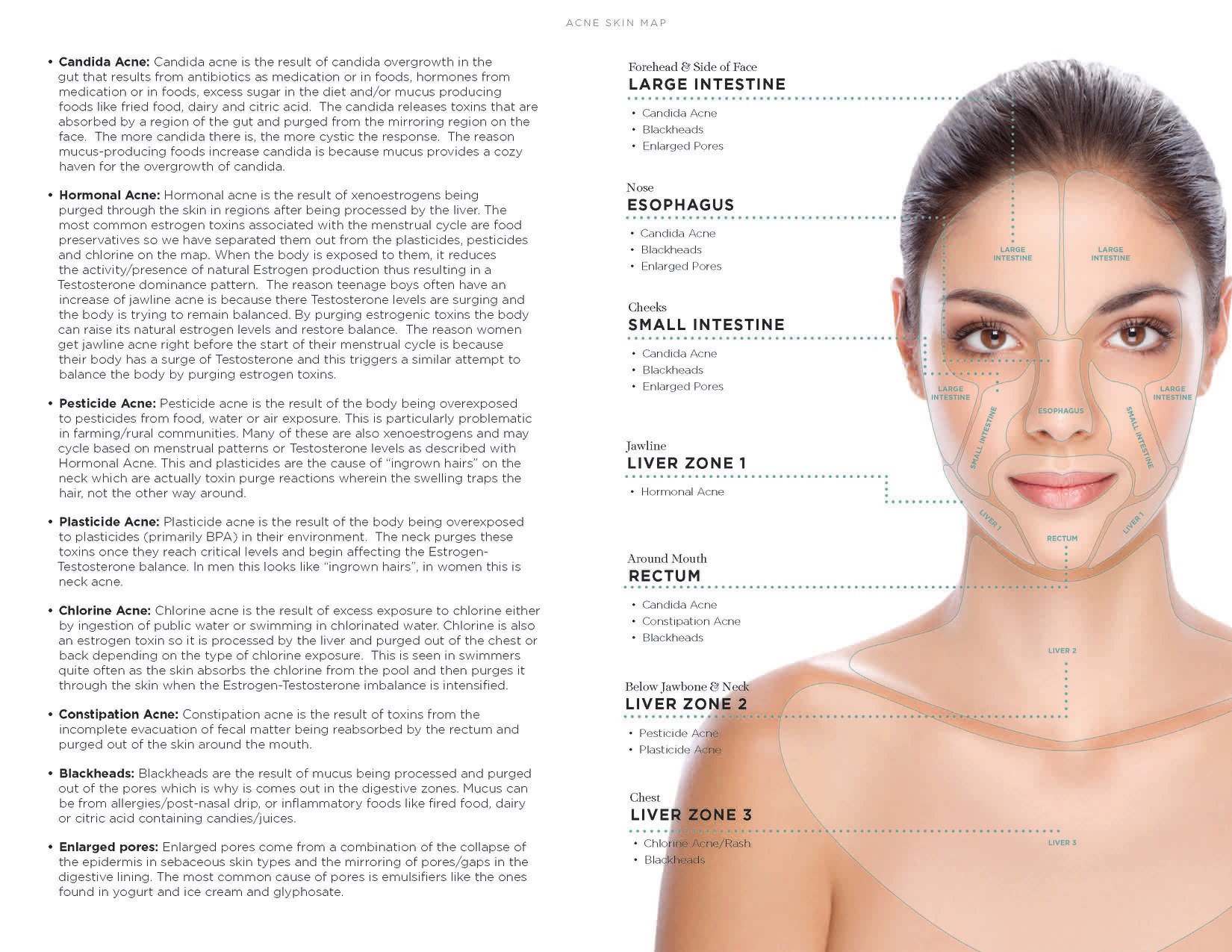